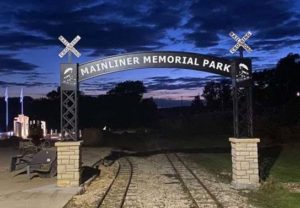 A new Memorial Park has been established at Camp Courageous in eastern Iowa to honor veterans and those who’ve served others during the pandemic. Camp Courageous, near Monticello, provides recreation and other services to individuals with disabilities.

Teri Connell and her husband, Brian, from Lake Delhi, helped finance the project at the camp.

“Our dads served in World War II, Korea and Vietnam and a lot of our family have served and are veterans, so we kind of looked at other and said: ‘Let’s do it,'” Teri Connell says.

There’s a brick courtyard in the memorial park with pavers where veterans and others can be memorialized.

“There are six limestone monuments that represent each branch of the United States services – for Army, Marine Corps, Navy, Air Force, Coast Guard and Space Force,” Teri Connell says. “We kind of think that this is the first one to go up that includes Space Force.”

Connell says there’s an area to recognize the civilian heroes of the pandemic.

“From health care workers to first responders, teachers, front-line workers in small businesses, we hope to never forget and appreciate their contributions…and the essential workers who have given their all,” she says, “and the way to remind our kids that as civilians, the duty to help others is in all of us.”

There’s also a bronze statue of a little girl in a wheelchair, with her hand over her heart to signify Camp Courageous campers reciting the Pledge of Allegiance.