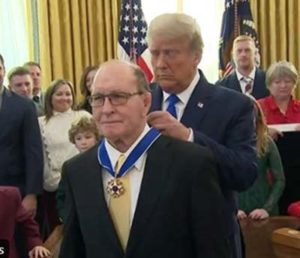 “No one has done more to promote wrestling in America than Dan Gable,” Trump said today. “He’s an athletic giant who conquered one of the most difficult and ancient sports in the world. He’s the greatest wrestler probably ever. We’ve never had anybody like him.”

Gable, a Waterloo native, was an Olympic gold medalist in 1972 who compiled a personal record of 117 wins and one loss as a collegiate wrestler at Iowa State. He coached at the University of Iowa for more than two decades, leading the Hawkeyes to 15 national team titles. Gable was also the head coach of three U.S. Olympic teams. Trump invited Gable and his family into the Oval Office for today’s ceremony.

Gable and the President before the ceremony.

Trump reminisced with Gable about his string of six matches in the 1972 Olympics. Gable didn’t give up a single point and defeated a Russian wrestler to win the gold medal.

“Now, I’m a larger than you a little bit. Do you think I could take you in wrestling, huh? Would I have a big advantage?” Trump asked.

Gable replied: “You would have no chance.”

Trump slapped the lectern and laughed. “I agree.”

Gable, who gave brief remarks, credited what he called “performance and lifestyle” for his success in the sport.

“It wasn’t perfect because nothing’s perfect, but no place on this Earth is perfect and there’s always room for improvement,” Gable said. “The success one has with others…is more important than the success you have as yourself.”

Gable recognized his wife of 46 years and the 22 other members of his family who were in the Oval Office with him.

“They are witnessing this historic moment of someone quite ordinary, mostly, going to the highest level as an athlete and then helping others do the same through the professional level of coaching,” Gable said.

Gable said the proof of his approach is in the results.

“For those that couldn’t be here because of limitations or have passed, especially my mother, Kate, my dad, Mack and my sister Diane who was murdered in our own home as a teenager because she fought for her life and didn’t give in, I know they are here,” Gable said, “and they’re all proud.”

Gable suggested his status as the only wrestler to be awarded the presidential medal of freedom should be an inspiration to current wrestlers and coaches.

“By the way, wrestling isn’t for everyone, but it should be,” Gable said, “and now females are strongly participating across the world.”

The presidential medal of freedom and the congressional medal of honor are the country’s highest civilian honors.