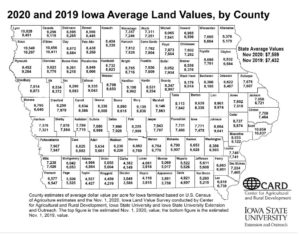 The annual Iowa State University Land Value Survey finds a modest one-point-seven percent statewide increase in the value of an acre of farmland in 2020.

Survey leader Wendong Zhang says there was a big difference in price changes based on the type of land. “Nearly flat for higher quality and 6.7% growth for low-quality land,” Zhang says. “Overall across the nine crop reporting districts, only southwest Iowa saw a modest one percent decline. While the other eight crop reporting districts reported a zero to three percent growth.”

That puts the average price of an acre of ground at $7,559. He says continued low interest rates were part of the reason for the slight land value increase. Zhang says another driver is a recent rally in commodity prices because of surging exports and improved trade prospects.

Zhang says the federal payments to farmers from the pandemic had some influence — but he doesn’t think we’ve seen their full impact yet. “About 46 billion dollars was a significant portion of the COVID relief payments and that has resulted in the 30 to 40 percent growth in U.S. farm income and that certainly has stabilized the market. But it takes multiple years for changes in government payments and interest rates to be fully capitalized in the land market,” according to Zhang.

Scott County and Decatur Counties reported the highest and lowest values, respectively for the eighth straight year. Despite having the highest overall value — land values in Scott County decreased $178s per acre to $10,659. Decatur County saw average values increase $264 per acre to $3,849. He says the lower value land has an increasing demand outside of the normal crop production.

“For the lower quality land, it seems that one of the factors is a strong demand for recreational acres might behind the six-point-seven percent growth compared to the one-point-seven percent average statewide,” he says. Zhang says people want that land for pasture and timber grounds for hunting and it is even more appealing with social-distancing requirements in place.

Zhang says this survey didn’t show the impact of the political landscape — but another indicates it could impact land issues in the future. He says a Purdue University survey that shows farmers are more concerned about whether there will be more environmental regulations, less farm subsidies, and less support for ethanol. “So there are some and concerns.”

Zhang says on the other side there is some thought that there could be fewer questions about trade issues with a new administration. He says the land values are likely to continue slowly improving. Zhang says they asked professionals about the value one year and five years from now and they project stable land values with maybe a slight increase in the next 12 months. He says the projection for the next five years is an increase of value between five and ten percent.