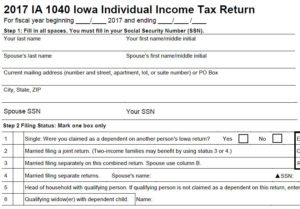 A CPA who is an economic advisor to Iowa Governor Kim Reynolds says Reynolds is developing proposals to boost broadband access and expand housing in Iowa.

Joel Anderson, who is a member of the governor’s paid staff, spoke earlier this month to an online gathering of the Iowa Chamber Alliance.

“We are not like other states where we are having to talk about revenue increases such as the state to the north of us and a state to the east of us,” Anderson said. “We can actually, are going to probably be one of the few states that will be able to talk about tax reform again.”

Anderson has shifted from his role as tax policy advisor to work on economic issues during the pandemic, as Reynolds and her staff have discussed how to spend over a billion dollars in federal aid.

“This governor is very committed to making sure that we can grow businesses, recover from this and get on the other side of 2020 as fast as possible,” Anderson said.

Anderson worked with an economic advisory board the governor appointed earlier this year. The group’s final meeting was in October and its top recommendation was for the state to make child care more accessible and affordable.