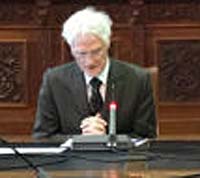 The man who has been state budget director for the past decade is retiring after a 38-year career in state government.

Dave Roederer was part of former Governor Terry Branstad’s staff in the last century before Branstad’s return in 2011, when Roederer was named director of the Department of Management. Governor Kim Reynolds kept him in that role when she became the state’s chief executive in 2017.

Roederer, for the past decade, also has been part of the three-member panel that makes state revenue forecasts after reviewing data and holding a public discussion of current economic trends.

“I think everybody in the world would like to know what the final outcome is going to be,” Roederer said of the pandemic during a meeting this past March, “but we aren’t going to know that until it happens.”

Roederer has served in a variety of state government roles. In 2008, he was John McCain’s Iowa campaign chairman.

“Over the years, it seems like campaigns have become, the total goal is to win. That’s not the case,” Roederer said on Iowa PBS in 2011. “The reason you run for office, to get elected, is so that you can do something once that you get in.”

Roederer’s last day on the job is January 31.