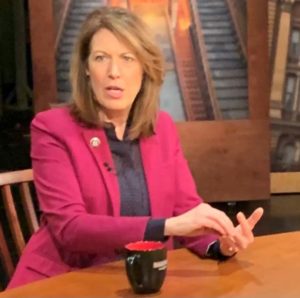 “The American public needs this more than ever,” Axne said this morning, “and so many of the provisions of the policy that he’s putting forth will help us move through this pandemic really quickly.”

The plan would provide $1400 stimulus checks to most Americans as well as subsidies for child care. It also calls for spending hundreds of millions of dollars to speed up deployment of Covid vaccines.

“I like to say we’re going to bring the vaccine to people where they, not just bring it to places where we hope that they are and so you know one of the most important things to move us through the economic downturn we have is obviously to get people back to a healthy state, free from contacting Covid-19,” Axne said. “A lot of provisions in there help us with that and certainly on the economic side as well.”

Congresswoman Ashley Hinson, a Republican from Marion, said her top priority is getting another round of Paycheck Projection Program grants to small businesses.

“Making sure people are unemployed continued to have that extended unemployment relief is also important to me,” Hinson said this morning.

Hinson isn’t ruling out a “yes” vote on the package Biden presents to congress after he’s inaugurated next week.

“I hope we can get aid targeted to Iowans and I hope it’s not politicized like the last round of Covid relief,” Hinson said, “so I’m ready to get to work on it as soon as we see a bill.” Hinson says.

Hinson made her comments during a conference call with Iowa reporters this morning. During taping of this weekend’s Iowa Press program on Iowa PBS, Congresswoman Axne didn’t rule out a run for governor or the U.S. Senate in 2022. Axne said a decision about the next campaign will come in a few months.

“I not going to leave anything off the table, but I haven’t made a commitment on what I’ll be looking at at this time,” Axne said.

Congresswoman Hinson, during an Iowa PBS appearance in December, didn’t rule out running for the U.S. Senate if fellow Republican Chuck Grassley decides against seeking an eighth term in the senate.

“There’s a lot of things to consider. Like any decision, I have to talk to my husband first,” Hinson said, laughing along with Iowa Press host David Yepsen. “I’ve got kids to consider, too. It’s all part of the conversation, right, about any decision in life.”

Both Hinson and Axne said they are focused at the moment on the jobs they were just elected to do.