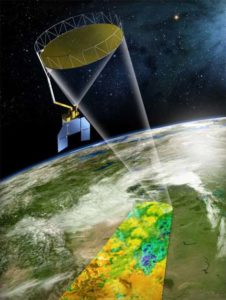 An illustration of a satellite by Professor Hornbuckle.

Two professors from Iowa State University and the University of Iowa recently served on a panel that determines the future of NASA satellite missions.

ISU agronomy professor, Brian Hornbuckle, says these are satellites that are experimental.

“When you watch the news or look at the radar on the web you might see some satellite images. We would call those operational satellites that have been launched by the weather service or something like that. We know how they work,” Hornbuckle says. “But the things that NASA does, they launch new types of satellites — kind of like discovery things — because we don’t know for sure how they are going to work and what they are going to see.”

Hornbuckle says the panel he served on helps determine how long missions last on these discovery satellites. He says they usually have a prime mission of three to five years where they collect information — but every satellite is built to last longer — and they often find out that the information collected is really important.

Hornbuckle says they usually have one or more new satellites proposed each year as the older ones are taken out of service. That depends on the budget for NASA, and he says that is why the review panel is important, because there is a finite amount of money.

Hornbuckle says the satellites go through all types of testing — including flying on planes — to see if they work before rocketing into space. But even that testing sometimes fails to find flaws and the satellite mission doesn’t pan out.

“That’s the thing about research is that no one has done it before, so you don’t know what is going to happen,” according to Hornbuckle. “There is some amount of risk that you take.” Hornbuckle was chosen to be on the panel because of his work with NASA using a satellite that determines how much water is stored in the soil.

“That’s a really important component of weather and weather prediction, and something that we aren’t able to measure very well right now,” Hornbuckle says. “And it’s especially important here in Iowa, because we have these big crops that pull a lot of water out of the ground during the summer and put it back in the atmosphere.”

Hornbuckle has worked on other NASA satellite projects as well, and says they provide lots of information on a variety of issues that help researchers. He says these discovery type satellites don’t get all the attention that things like trips to the space station get.
“It’s a really important aspect of NASA that I am excited to highlight because it’s going to enable us to make good decisions about what we do in the future — which is important — because this is the only planet that we can live on,” Hornbuckle says.

University of Iowa Chemical and Biochemical Engineering professor Jun Wang served on the panel with Hornbuckle.