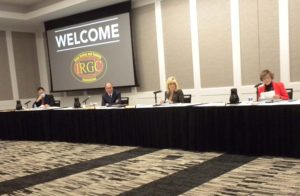 The Iowa Racing and Gaming Commission approved an underage gambling fine of $20,000 today for the Wild Rose Casino in Clinton.

The 20-year-old visited the casino some 40 times and gambled — but Wild Rose vice president Tom Timmons says this was a unique case. “This person had his cousin’s ID. And the cousin and him were practically identical twins, definitely the same DNA,” Timmons says. He says the cousin was seven months older and was 21.

Timmons admitted the report on the incident looks bad — but says it is frustrating because he believes there aren’t many people, including himself, who could have discovered the ID switch. He says the illegal use of the ID was only discovered by a relative who worked in housekeeping and was there to disinfect the casino. He says it was the juvenile’s aunt who recognized him and it didn’t hit her until that night when she got home that he was about the same age as her daughter and wouldn’t turn 21 for another month. The aunt came to work the next day and told security.

A review of security video showed the juvenile was not asked for an ID in 13 of the times he came onto the casino floor. Timmons says that was a mistake — but also says many of those times the juvenile’s ID had been checked and he left to get something to eat and then came back — so the security guard had checked him earlier. Timmons asked the commissioners to consider those circumstances. He says they have now worked with the DCI to add an extra layer of security with handwriting analysis.

“Our people are not handwriting analysis people. However, I’ll give the D-C-I credit. They’ve put every one of our security people through a six-hour training course, and now we have implemented that at our podium,” Timmons says. Casino General Manager, Steve Nauman, says the handwriting analysis has gotten results.

He says they have found that it scares the person just asking them to sign a log book to check their signature. “We have probably scared off a half dozen since then because they don’t want to sign the thing. They’ll just hit the door and out they’ll go,” according to Nauman. Nauman says they have to be careful when determining to check a signature, so they do not turn off customers. He says they look for changes in appearance in the person and their driver’s license that might indicate something is not right.

The Riverside Casino was also fined for letting in an underage gambler. Sharon Haselhof represented the casino.
“I can tell you all of this would have been avoidable had we done our job at the turnstile,” Haselhof says. She says they have taken steps to try and remedy the problem.

“A mistake happened and it shouldn’t have happened. We reinforced to all of our security team members the importance of asking for an I-D should they suspect that someone could be underage,” according to Haselhof.