You are here: Home / News / Hinson says Biden’s plan not the answer to fix immigration 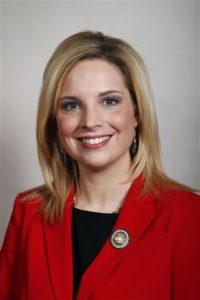 Republican Congresswoman Ashley Hinson says she wants “to find common ground” where she can with President Biden, but Hinson today said Biden is “taking a partisan approach” to immigration reform.

“I think proposals that are too far on either side are not the right path for us,” Hinson said during her weekly conference call with Iowa reporters.

Hinson said she prefers speeding up the legal immigration system rather than giving undocumented immigrants a path to U.S. citizenship.

“Blanket amnesty is not the answer and I think these actions that would provide mass amnesty for illegal immigrants really weaken our enforcement mechanisms. I think halting border wall construction is wrong for our country,” she said.

“I do think we do need to do something for people who were brought to this country through no fault of their own,” Hinson said, “so I do see that as something that congress needs to address, so I look forward to working on that.”

As for the outline of Biden’s pandemic relief package, Hinson noted her opposition to Biden’s call to significantly raise the minimum wage.

“The Covid-19 pandemic continues to take a very real toll on the working people of Iowa and across the country, so I hope that we see a targeted relief option from the Biden Administration soon rather than a proposal with items like a $15 minimum wage mandate,” Hinson said. “I know that would decimate our rural economy and it would hurt Iowa businesses and a lot of small businesses and I think right now there are a lot of small businesses that couldn’t take that hit.”

Hinson, who is from Marion, represents Iowa’s first congressional district.