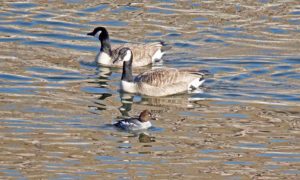 If it seems like there’s an inordinate amount of Canada geese flocking around Iowa right now, you’re not imagining things.

While many of the distinctive black-and-white-necked birds live here year-round, others are in the midst of a migration from Canada to parts south.

Orrin Jones, a waterfowl biologist with the Iowa Department of Natural Resources, says Iowa’s city-dwellers are likely noticing the gobs of geese the most.

“The geese are actively seeking out the metropolitan areas,” Jones says. “That’s a very attractive place for them right now. It has a combination of open water sources, food, and relative safety.” Hunting season on geese in central Iowa just ended last weekend.

The DNR is tabulating figures from a recent Canada goose count that pegs the Des Moines population at around 20,000, though statewide numbers aren’t quite ready yet. Iowans can’t help but spot the big birds in places where they usually congregate — and elsewhere.

“Right now, we have a mixing of a lot of different populations of geese and their movement patterns coincide with a lot of people’s daily commutes,” Jones says. “When the birds are very active, that’s when people are very active and it leads to this perception that there’s just a huge amount of geese in the area — and there are a lotta’ geese.”

The goose population is not too high, he assures, saying the current numbers are within the state’s objectives for the feathered creatures. While some of the geese are permanent Iowa residents, Jones notes that others are in the midst of an annual migration. “Whether they stay here or go farther south or go back north will depend upon the weather,” Jones says. “If the winter gets more severe, they’ll continue farther south. If it becomes more mild, they’ll spread out or maybe move farther north or maybe distribute across Iowa.”

If you’re tempted to toss some bread to those geese, don’t. Jones says the wild waterfowl need to be able to find food on their own. Plus, he says human food is often detrimental — and can be dangerous — for geese.