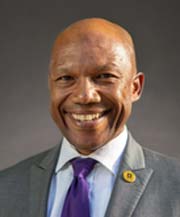 The Iowa Democratic Party has a new chairman. It’s Ross Wilburn, a former Iowa City mayor who currently lives in Ames and was just elected to a second term in the Iowa House.

“I’m honored by the responsibility and I’ve got faith in our party,” Wilburn said.

The party’s governing board elected Wilburn chairman this weekend. He’s the first black Iowan to lead either of Iowa’s two major political parties.

“I will start with the words of Vice President (Kamala) Harris, you know, the first, but make sure that I’m not the last,” Wilburn told reporters during an online news conference.

Wilburn acknowledges Democrats must rebuild after major losses in recent elections. Wilburn said the party has to focus on getting Democrats elected to city and county offices as well as state and federal offices.

“We must engage more Iowans and convince the working class, farmers, factory workers and our diverse constituencies that our party is on their side and will be at their side,” Wilburn said during a brief speech to the Iowa Democratic Party’s State Central Committee. “…Let’s focus our messaging so that people will know what it means to be a Democrat.”

Wilburn is a Davenport native and he served in the Iowa National Guard. He will remain a member of the Iowa House, but plans to resign as a diversity consultant for Iowa State University Extension to work full-time as party chairman.

Wilburn takes over from Mark Smith of Marshalltown, who stepped into the role last February after the party’s failure to quickly report the results of the 2020 Iowa Caucuses. Smith oversaw Saturday’s meeting to elect his successor.

“The role is challenging, demanding and rewarding,” Smith said.

Wilburn was elected with the support of nearly two-thirds of the members of the Iowa Democratic Party’s State Central Committee. Jodi Clemens of West Branch, who worked on Bernie Sanders’ presidential campaign, was Wilburn’s main challenger. She said the party’s in its current predicament been it’s been too dependent on national campaigns and paid staff.

“Iowa’s swing from blue to red did not happen overnight,” she said. “Over time, we have shifted focus away from local infrastructure and grassroots volunteers.”

Dickinson County Democratic Party chairman Brett Copeland was nominated to be state chair, too, but withdrew from consideration after a brief speech.

“We cannot be afraid of difficult conversations and we don’t need to be if we give ourselves the appropriate room to make them effective,” Copeland said.

Wilburn said his goal is to develop a long-term plan for the next three election cycles. Iowa Democratic Party leaders have also reelected June Owens as the party’s vice chair.

“I am prepared to meet our challenges head on, from day one,” Owen said. “Together, we can rebuild the party.”

Owens and Wilburn both said they will make the case with national party leaders that Iowa’s Caucuses should remain first in the nation.

Earlier this month, the Iowa GOP’s governing board re-elected Jeff Kaufmann as state chairman. Linda Upmeyer of Clear Lake, the former speaker of the Iowa House, was elected co-chair of the Republican Party of Iowa.