You are here: Home / News / Roadways in Eastern Iowa still not fully cleared of snow and ice 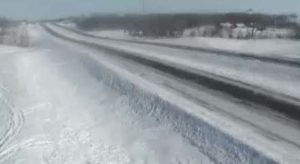 DOT camera view of snow on Highwy 30 near Cedar Rapids.

State road crews are continuing to work on the highways to scrape off the snow and ice following Thursday’s blizzard.

DOT Winter Operations Administrator, Craig Bargfrede, says conditions are better in some areas today. “We’ve really made some significant progress today in getting roads back to near normal. We still have a large portion across the state that are partially covered,” he says.

He says the eastern part of the state has some of the worst conditions. He says in the Cedar Rapids, Maquoketa, and Dewitt areas they still have some 100 percent covered roadways. Bargfrede says the mixture of the precipitation and temperatures made it difficult.

“Starting with rain and freezing rain and the temperatures just really dropped and we saw that flash freeze occur in a large portion of the state — followed by snow and then the wind,” according to Bargfrede. “So that really created a challenge for us to treat those roadways properly from a material standpoint — especially when we start getting into those lower temperatures.”

The salt doesn’t work as well when the temperatures drop and Bargfrede some areas had to add sand to the salt mix just to have something to give some traction on the roadways. Crews are also doing some maintenance to clear the way for the next snow that comes in.

He says they are using snowblowers in a number of areas and will be going out and doing “winging” operations where they go along and wing back the snow on the edge of the road. Bargfrede says that is important to allow space if more snow falls and has to be plowed off the pavement.