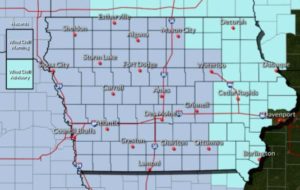 There was nothing sweet about the weather on Valentine’s Day as the brutal cold continued its grip on the state.

State Climatologist Justin Glisan says many areas saw records. “Over 50 stations broke their daily minimum high temperature on Valentine’s day. So that is the coldest daytime high they had seen for the 14th. Anywhere ranging from zero degrees in Oskaloosa to negative 16 degrees in Rockwell City,” Glisan says.

Halfway through the month, we are averaging double digits below the normal February average temperature of 24 degrees. “We’re currently sitting at six degrees,” according to Glisan, “so 18 degrees below the monthly average. The caveat being there is that we will rebound ass we add more days to the month, and as we do warm-up.”

Glisan says a disturbance in the polar vortex is allowing the cold air to flow into Iowa and many other states. Record snowfall in many areas is also contributing to the low temperatures.

“Snowpack acts to reflect the light up, that solar radiation up, that is coming in from the sun — and that does tamp down these daytime high temperatures. When you don’t get those temperatures up during the day, you are only on the downhill slope at night when the sun goes down. So yes it does impact the temperature that we do see,” Glisan says.

He says you can see the impact if you look at large trees you will see a tree ring from where the tree is absorbing solar radiation short wave in and emitting long-range radiation, or heat out. “And you will start to see those rings expand as you get into, hopefully, sunny days and warmer days, ” he says.

Glisan sees the impact in other ways as well. “Some of the remote sensing tools, the satellites that we are using looking at clouds — we are actually picking up the snowpack at the surface since it is so cold,” he explains. “You can get snowpack down into negative temperatures as well.”

Glisan says we saw the same phenomenon back in January of 2019. “That was over a four to five day period where we had temperatures actually colder than what we are seeing now — but just over two or three days in the negative 20s and the negative 30s. We had wind chill values up in northern Iowa in the negative 50s to the negative 60s. That’s extremely cold air,” Glisan says.

The forecast is calling for things to slowly warm up through this week and moving toward the 20s for highs by the weekend.