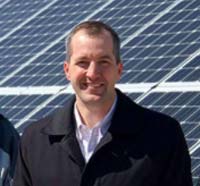 “That so-called report was a bit of propaganda, I think. It was obviously a Washington, D.C based advocacy organization,” Naig says. “They can go out and say what they want to, but what they talked about related to Iowa is not based in fact. We’re moving in the right direction.”

The American Rivers report described the farm chemicals and manure that drain into the Raccoon River as “a grave threat” to using the river as a source for drinking water. Naig says there’s recently been an acceleration of the voluntary nutrient reduction strategy state officials unveiled in 2013 to promote rather than require conservation practices on Iowa farms.

“We’ve got a long ways to go and I don’t sugar coat that at all…The strategy calls for a 45% reduction in nitrogen and phosphorus loss off of the Iowa landscape,” Naig says. “That’s a big number, not easily achieved. It’s going to time and focus, but the evidence is moving in the right direction.”

About two million acres of Iowa farmland is now planted with oats, rye and other so-called cover crops that hold soils in place. Naig says it took 15 years to reconstruct 100 weblands and another 50 are currently under development. The number of filtration systems called “bioreactors” in Iowa will double after one project in Polk County is completed later this year.

Meanwhile, the CEO of the drinking water system for half a million central Iowans says there will be a catastrophe if the state doesn’t find a way to more quickly reduce ag pollution in the Raccoon River. Naig says the Des Moines Water Works is providing safe drinking water now and every indication is it will be able to do so in the future.

“Last year, 2020 — a year unlike any other in terms of disruption to all of our lives, we set a record in terms of conservation adoption in the state of Iowa,” Naig says. “Even in that environment, more farmers, more landowners, more focus, more resources, more partners doing more on the ground than at any other time in our state’s history.”

Naig made his comments during taping of “Iowa Press” which airs tonight at 7:30 on Iowa PBS.