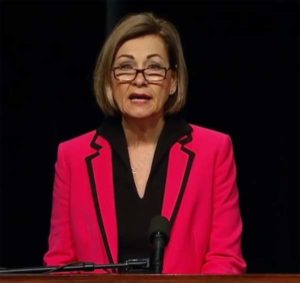 “A jury of his peers found him guilty on all three charges,” Reynolds said in response to a reporter’s question at a news conference on Wednesday. “…It’s time that we all come together as a country, heal and continue to move forward.”

Last June, Reynolds signed a police reform law that, among other things, forbids Iowa police from using choke holds in most situations. In January, Reynolds called for a statewide ban on racial profiling in policing, but the Republican-led legislature has not advanced the idea.

“We’ll continue to work on it,” Reynolds said. “We’re still in session. We’re still working through the process and we’ll see where it goes.”

The House and Senate are pursuing other ideas, like broader liability protection for police and increased penalties for rioting, but a final plan has not emerged.