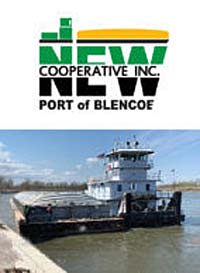 A cooperative based in Fort Dodge has built an 11-million dollar barge terminal on the Missouri River near the small Iowa town of Blencoe.

The NEW Cooperative Port of Blencoe is about 50 miles up river from Council Bluffs. The port has the capacity to load and unload up to nine barges at a time. Test runs began in April. The official opening is today.

The Missouri River terminal may help reduce operating costs for western Iowa farmers. Shipping commodities like corn, soybeans, and fertilizer by barge is cheaper than transporting the materials by trucks or trains. One tow managing 15 barges can handle as much material as 870 semis according to the Iowa DOT.

The Port of Blencoe is now the northernmost access point to barges on the Missouri River. Barge traffic out of Sioux City ended around the turn of the century due to a combination of factors, including a lack of consistent river depth for navigation. State officials say the Army Corps of Engineers has agreed to maintain a nine-foot depth in the Missouri near the Port of Blencoe to accommodate barge movement.