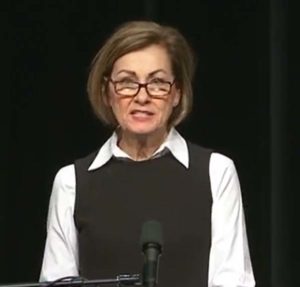 Iowa’s first female governor is ruling out a run for federal office and making it clear she’ll seek reelection in 2022.

“I can say with great confidence I am not leaving Iowa,” Governor Kim Reynolds told reporters in Lake View today when asked if she might run for the U.S. Senate if Republican Senator Chuck Grassley decides not to run for reelection next year.

In 2022, Reynolds will be running for reelection.

“We’ll make a formal announcement later, but I’m not done with what I want to do. I’ve got some things I want to continue to work on. I love this state…Our family’s here. I have 11 grandchildren here and so I want to stay in the state and you can work on policy and be effective in what you’re doing,” Reynolds said, suggesting governing at the state level is different than what’s possible at the federal level.

Reynolds, a Republican, took over as governor four years ago when Terry Branstad resigned to become U.S. Ambassador to China. In 2018, she was elected to a full, four-year term. Several Democrats are considering a run for governor in 2022, including State Auditor Rob Sand, who won his first statewide race in 2018.