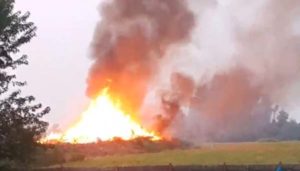 A judge has ordered a Sergeant Bluff man to pay an $80,000 civil penalty for burning thousands of railroad ties on his property.

State regulators say they warned John Goldsmith Goldsmith not to burn some 30,000 railroad ties after he called a DNR employee in 2018, and said he intended to burn some of them. He said that disposing of the ties would cost significantly more than his property was worth.

The lawsuit against Goldsmith says he barricaded the property to prevent anyone from getting in and then burned the railroad ties through three days. The judge issued the maximum penalty and also issued a permanent injunction against Goldsmith to keep him from violating solid-waste and open-burning laws.

The judge warned Goldsmith that he could face contempt charges and possible jail time if he disobeys the judge’s order.