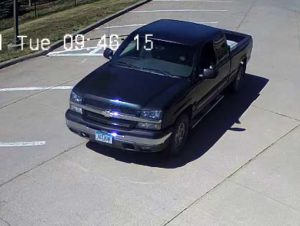 Sumner police are looking for this truck.

Police in the northeast Iowa town of Sumner are looking for a blue-green Chevy extended cab pickup after the possible attempted abduction of a 14-year-old girl outside the town’s public library.

Sumner police chief Chad Koch says tips have flooded in since the incident on Tuesday morning.

“We want to thank everybody for their assistance,” Koch said, “and let everyone know that we are working around the clock to try to bring this incident to a resolution and determine exactly what happened.” 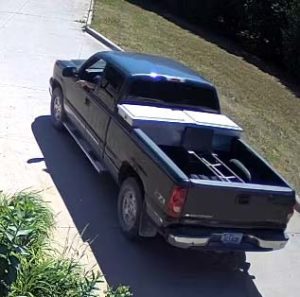 The pickup’s license plate is visible in several photos, but as yet, there’s no word on any arrests in the case. The driver, Koch says, has been identified. “We’ve had a lot of calls, messages, information passed our way regarding this incident,” he said, “and all that information has been useful and we sincerely appreciate that.”

Chief Koch explains what happened that morning about 10:40. “A young, 14-year-old girl was at the Sumner Public Library parking lot,” he says, “at which time a vehicle pulled up and the driver attempted to entice the young lady into his vehicle.”

The chief says the girl is fine — and she did the right thing by ignoring the man, going inside the library, and reporting it.