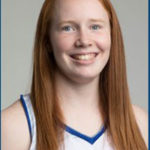 Hittner, an Urbandale, Iowa native, returns to her alma mater after playing one season of professional basketball in Spain’s LF Endesa. She is one of the most decorated Drake women’s basketball student-athletes on the basketball court and in the classroom. Hittner was a two-time honorable mention all-American, a two-time CoSIDA Academic All-American in the classroom, three-time MVC Jackie Stiles Player of the Year award winner and her name is found all over the Drake and MVC record books, including points, three-pointers made, three-point percentage and scoring average.

“Becca has lived Drake women’s basketball as a student-athlete, a top performer in the MVC and most recently playing professionally overseas,” Pohlman said. “It’s a great feeling to bring her back and know she will be great for our student-athletes as part of our staff. She is among one of the best to wear a Drake uniform and to have her insight, success and experience to reflect upon as our graduate assistant is really exciting!”