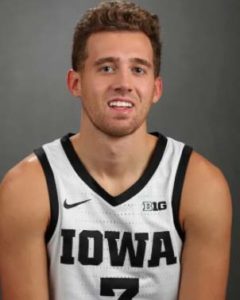 University of Iowa basketball standout Jordan Bohannon isn’t wasting any time cashing in on his name, likeness, and or image.

The NCAA on Wednesday approved temporary measures to allow college athletes to enter endorsement deals, charge for autographs, and generally profit off of themselves. Bohannon has been a vocal supporter of that move…and today he will make an appearance at an Iowa City fireworks store to sign autographs and promote spending $10 on fireworks to earn a chance to win the shoes he wore when he hit a game-winner versus Wisconsin.

Bohannon will also begin to sell his own line of apparel, called J3O. The NCAA’s announcement came just before laws allowing athletes to make money in this manner went into effect in several states. While college athletes will be able to make money off their name, likeness, and image, the NCAA continues to prohibit the schools from paying the athletes.