You are here: Home / News / Iowa stops for caravan conveying coffins of Native American students who died a century ago 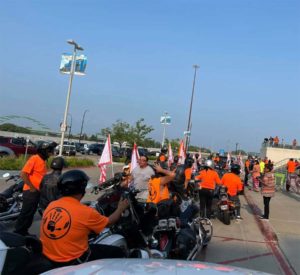 The caravan heading west with the remains of nine Native American children who died over a century ago at a Pennsylvania boarding school stopped at the Meskawki Settlement in Tama Thursday.

The nine children, from the Sioux Tribe, were among hundreds of Native Americans forcibly removed from their homes and sent to the school where their hair was cut, their names were changed and they were punished for speaking in their Native language. Yolanda Pushetonequa of the Meskwaki Tribe says the settlement was honored to be a stopping point, especially considering the Sioux and the Meskwaki weren’t always allies.

“Right now, it’s a generation of healing together and having unity as we confront a lot of these traumatic experiences that we’ve all had as indigenous people,” she says.

The gathering began with a prayer circle, followed by a shared meal and remarks from a representative of the Rosebud Sioux Tribal Council who has been coordinating the burials in South Dakota. Pushetonequa says it was a time of intergenerational healing.

“A lot of the social issues that we face, they derive directly from what happened to those children at the boarding schools and then came back home with that trauma with them,” she says. “It’s not just something that you can shake off.”

Jenna Thomas, who lives on the Meskwaki Settlement, has a family connection to the Rosebud Sioux. Thomas says her family knew of children who died at government-run boarding schools, but never what happened to some of them.

“I’m really happy at moments that we’re able to finally get this closure and that they get to come home, but at the same time when you think about where they were and how far away from home they were, what they might have witnessed or endured while they were there…that really makes me sad,” she says. “And it hurts.”

The Winnebago Tribe will host a ceremony in Sioux City this (Friday) morning for relatives of the nine boarding school students, who died between 1890 and 1910. The Indian Industrial School in Carlisle, Pennsylvania, was closed in 1918. U.S. Interior Secretary Deb Haaland has said her department will investigate the 367 boarding schools where as many as 7,800 children from nearly every tribal nation in the country were taken for assimilation.