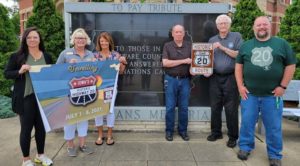 What the locals call Old Highway 20 across northern Iowa is now a designated route through Delaware County as part of an effort to revive the roadway nationwide, and to help small towns and small businesses in the process.

Brian Farr, with the Historic Route 20 Association, explains the goals. “This isn’t the four-lane Highway 20, this is the old highway that ran through the downtown areas,” Farr says. “Some of that has been removed for 30, 40 years. Our mission was to bring 20 back as a historic highway into the towns.”

There are now more than 180 road signs across the state guiding people along the original Highway 20 – including in Manchester, Earlville, and Dyersville. “We want to draw people back into the small towns,” Farr says. “I really feel that when you’re traveling the four-lane, it’s there for a reason, to get from A to B in a hurry, but there’s not a lot to see. We want people to support your small businesses, your mom-and-pop shops, or to just see something unique and historical.”

Farr says he’s learned about Old 20 in Iowa and it’s a rich history. “This was an Iowa project but we formed the organization to be a nationwide project,” he says. “We want people to travel from Massachusetts, where Highway 20 begins, all the way to Oregon, but to take the original alignments because you definitely see a lot more.”

Farr lives on Highway 20, too – in Massachusetts – and he says even though it’s a thousand miles away, when he’s in Iowa, he knows Old 20 will get him home.