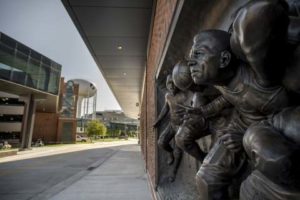 The depiction of Duke Slater outside Kinnick Stadium. (U-I photo)

The Board of Regents has approved a proposal to name the football field at Kinnick Stadium in honor of Hawkeye football great Duke Slater.

U-I vice president, Rod Lehnertz, presented the proposal to the facilities committee. “Duke is recognized as one of the greatest players in Iowa football history — and was a pioneer — breaking through racial barriers both in football and throughout his professional life,” Lehnertz says.

Slater grew up in Clinton, and played tackle for the Hawkeyes from 1918 to 1921. “He was the first black student-athlete in school history to earn All-American honors. He was a three-time first-team All-Big Ten selections, and competed for the Iowa Hawkeyes in football as well as track and field,” he says. “Iowa had a 7-0 Big Ten record in 1921 — his final year with the Hawkeyes — claiming the conference title, and the team was named by more than one outlet as the national champion that year.” 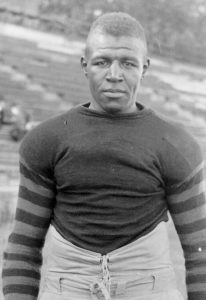 “Following the NFL he enjoyed a successful career, which culminating in being named the first black judge to the Cook County Superior Court in Chicago, Illinois,” Lehnertz says. Slater was elected to the Pro Football Hall of Fame Centennial Class in 2020. Slater died on August 14th of 1966 at the age of 67.

“The University of Iowa believes the naming of Duke Slater field at Kinnick Stadium is the proper capstone to honor a remarkable Hawkeye and a remarkable citizen of our state,” Lehnertz says. A residence hall on campus was named for Slater in 1972, and a statue of him stands on the north side of Kinnick Stadium.