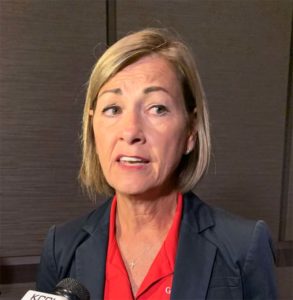 Governor Kim Reynolds says she’ll go to court if the Biden Administration tries to overturn the law she signed that has banned mask mandates in Iowa schools.

Biden has asked the U.S. Education Secretary to determine if the mask bans in six states, including Iowa, violate federal law.

“I think it’s incredible that he’s coming after me when we led the country in getting our kids back to school and doing it safety and responsibly,” Reynolds said this morning.

“It went through the legislature,” Reynolds said. “We have elected officials representing Iowans all across this state that voted on that bill and I signed into law and so we’re doing what we need to do.”

Reynolds spoke briefly with reporters following a news conference announcing the return of Indy Car racing at the Iowa Speedway. The ban on mask mandates in schools promotes the “social and emotional wellbeing” of children, according to Reynolds.

“Come walk the fairgrounds with me for just a day and I want you to see the number of moms and dads and teachers and children (who) literally have tears in their eyes — Tears! — when they come up to me and say: ‘Thank you. Thank you for getting my kids back in school. Thank you for not masking them up,'” Reynold said.

N-95 masks have been shown to prevent the spread of Covid, Reynolds said, but she is expressed doubts that cloth or paper masks are effective.

“Where’s the data the CDC is using to justify the mask mandate?” Reynolds asked.

The Centers for Disease Control is recommending that everyone in schools wear face coverings as the Delta variant of Covid is far more contagious and most students have not been vaccinated. Reynolds said Biden needs to stop “dictating” how states respond to Covid and the governor indicated she’s not concerned about losing federal funds if there is a dispute with the Biden Administration over this pandemic-related policy.

“Nine billion dollars in total has come into the state to deal with Covid and we’re over a year into this. You know, I mean that’s unconsciounable…We’ve got to pay that back at some point, so not only my grandchildren but probably their children,” Reynolds said.

The governor said Biden should focus on other things, like the airlift out of Afghanistan and closing down the southern border. Zach Wahls of Coralville, the Iowa Senate’s Democratic leader, said the governor should be focused on the unabated spread of Covid.

“Republican mistakes are why parents across Iowa are now facing extremely difficult decisions about sending their kids back to unsafe schools,” Wahls said during an online news conference.

Banning mask mandates in schools is putting school staff, children and their parents at “extreme risk,” according to Wahls.

“Forcing unvaccinated children back to school isn’t a plan,” Wahls said. “Continuing to ignore Covid isn’t a plan. Hoping that the Delta variant just goes away isn’t a plan.”

Democratic leaders in the legislature are calling Reynolds to accept 95 million dollars in federal funding she rejected in the spring that could be used to conduct regular Covid testing in Iowa schools. Erin Dahl, a Waukee mother who organized a sit-in on the Iowa Capitol lawn last week, also spoke at the Democrats’ news conference. Dahl said her husband is a public school teacher with a serious heart condition.

“It’s very scary to me to have him in a classroom with so many children at once with no masks on,” she said.

Dahl is hoping Iowa’s ban on school mask mandates can be declared a violation of the civil rights of people with disabilities.