You are here: Home / News / Hinson says Congress should investigate how U.S. military equipment got into Taliban hands 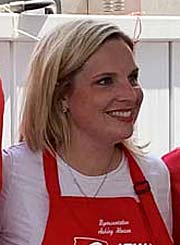 Ashley Hinson during an appearance at the State Fair. (file photo)

Republican Congresswoman Ashley Hinson and an Arkansas senator who’s among the potential 2024 GOP presidential hopefuls visited with veterans in Independence this weekend.

Hinson says the Biden Administration had intelligence reports that Kabul would fall to the Taliban and congress must investigate.

“Instead of talking about spending $3.5 trillion more dollars, we should be trying to find solutions to the problems happening in Afghanistan right now,” Hinson says.

President Biden says it’s time to end the war and there would have been chaos if the departure of U.S. forces had been delayed. Hinson says Congress should investigate why American military equipment is ending up in Taliban hands and she says any “arbitrary deadline” for withdrawal should be shelved until all Americans and allies in Afghanistan are evacuated.