You are here: Home / News / Grassley completes 99 county tour, talks about his future 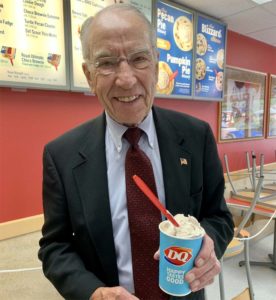 Senator Grassley tweeted this picture after finishing his 99 county tour.

Senator Chuck Grassley has completed his schedule of holding some sort of meeting in each of Iowa’s 99 counties every year.
“For the 41st year in a row!” Grassley said, with a laugh.

Grassley has been doing the 99 county tour since he became a U.S. Senator in 1981 and a town hall meeting in Greenfield Wednesday was his 99th and final tour event this year. He served six years in the U.S. House before that. During that period in the 1970s, Grassley toured the 16 counties in his House district four times a year. Grassley says it’s all because of something he overheard decades ago.

“I don’t even know whether they knew if I was in the room or not. If they did, then, that was their motivation for saying it,” Grassley says. “But they said: ‘It must be election time. Politicians are in town.’ And I thought to myself: ‘Do they think we only come around because we want to get reelected?'” Grassley says visiting businesses, schools and civil organizations as well as holding town-hall style meetings like the one in Adair County Wednesday helps him gauge public opinion and influences his votes in congress.

“I get vocal opinions of people either from their statements to me or the questions that they have to know what’s generally on their mind and some of them there’s no doubt what’s on their mind,” Grassley says. “I mean it’s so strong, some questions or some comments, which is perfectly legitimate.” The circuit has become known as “the full Grassley” and he’s gotten some guff from other politicians — including president candidates — who’ve been compelled to make the trek.

“Well, they kind of swear at me and say: ‘How come you started all this?'” Grassley says, with a laugh. Grassley says by November 1st he’ll make a decision about whether he’ll be campaigning for an eighth term in the US. Senate next year. He’s been talking with his wife, Barbara, and his immediate family about the decision.

“I think they are thinking it through and then what the people of Iowa have to say,” Grassley says. “Now, the latter is very difficult to determine because I don’t have just a few people say: ‘You ought to retire,’ and maybe those are people who want me to retire so they can elect a Democrat — I don’t know their motives, but I get a lot of people to encourage me to run.”

Iowa GOP chairman Jeff Kaufmann says he’ll be relieved if Grassley decides to seek reelection. During a rally in eastern Iowa this past weekend, Kaufmann called Grassley an Iowa legend. “We may very well have not had a Justice Kavanaugh had it not been for Chuck Grassley. That is one of his major legacies — Justice Kavanaugh,” Kaufmann said to cheers. “Thank you.” Grassley was chairman of the Senate Judiciary Committee in 2018 when Brett Kavanaugh was nominated and confirmed to the U.S Supreme Court.

A few people in the crowd booed Grassley when he was first introduced at the event. Genia Kujath of Marion is upset that Grassley voted for the infrastructure bill. “I voted for him the last round,” she said. “Not again. Never.” Grassley says if he could talk to her, he’d thank her for voting for him in the past.

“If I had a chance and they were interested in dialogue on the subject, I’d say: ‘Did you have the same opposition when Trump proposed $2 trillion? This is half of that amount,'” Grassley says. And Grassley says there’s misinformation circulating about his vote, suggesting the bill includes a mileage tax — which it does not. That’s in a separate bill Democrats advanced, which Grassley voted against. Grassley says groups representing Iowa’s ag sector, county boards of supervisors, and chambers of commerce around the state have all been telling him the state needs more federal help to repair roads and bridges.

“You hear about it for four or five years and get a chance to vote for it, shouldn’t I vote for it if I want to represent my people?” Grassley asks. Grassley says there’s a risk Iowa’s economy will suffer if the aging infrastructure isn’t fixed. The bipartisan infrastructure bill passed with 69 “yes” votes. Nineteen Republicans, including Grassley and the Senate’s Republican leader, were among its supporters.