You are here: Home / Sports / Iowa State beats UNI in a close one 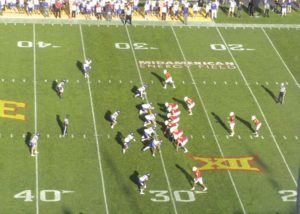 ISU with the ball against UNI. (RI photo)

Northern Iowa scored first and kept things close against heavily favored Iowa State throughout the game Saturday –but couldn’t pull it out on the final drive and fell 16-10 in Jack Trice Stadium.

“Hard fought win for us, I am really proud of our kids, I certainly give a lot of credit to UNI and their kids,” Cyclone coach Matt Campbell said after the game.

Campbell said he saw some improvement in his team, and also some areas they still need work on.  “Little things, like the touchdown, comes on third down, we’ve got them wrapped up for a sack. The slant, got ’em tackled and the guy makes a great play. A couple of offensive possessions you’re talking  just a

couple areas where you are off on a couple of little things. All things to be really honest with you I think you expect in a first game. Again, that’s a team that really believes and they are not ever going to beat themselves,” Campbell said.

Cyclone running back Breece Hall was held to 69 yards rushing in the game, but did score a touchdown.

“Hats off to UNI, their defense played a really good game, especially since they just played three or four months ago and they still had that togetherness,” Hall said.

Hall said he could have played better, and the team as well. “I feel like we were happy that we won the game — but we all knew that we could have done a little bit better…we didn’t play perfect today, we didn’t play Iowa State football,” Hall said. 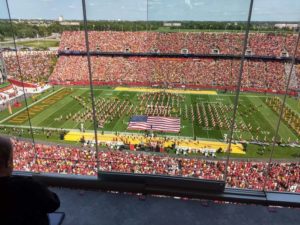 It was the first time since in two years fans were allowed back into the stadium and it was a sell-out crowd. Hall was happy about that. “It was good, for me, I haven’t had that feeling since my freshman year, just getting back into that atmosphere, just getting in front of the fans, getting the student section riled up and everything,” Hall said.

Campbell felt the same way. “It was great to be able to have that energy in the stadium. I just think for everybody involved to have some sense of normalcy, was really special,” Campbell says.

UNI goes on the road to face Sacramento State Saturday. Iowa State will host Iowa in Ames for the first time in two years as the game in Iowa City last year was canceled by the pandemic.