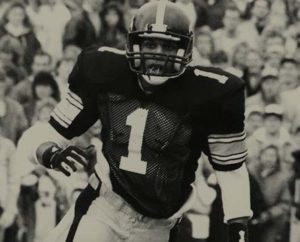 Former Hawkeye star wide receiver Quinn Early is returning to Iowa City this weekend to serve as grand marshal of the homecoming parade.

Early played at Iowa from 1984 to 1987 and went on to play 12 years in the NFL. Most recently Early has made a living as a stunt man, appearing in several TV shows and movies, including  the Disney+ series “The Mandalorian.” He got into the stunt business through a former teammate and businessman who invited him to try it.

“And the next thing I know I was hanging out the back of a truck shooting a machine gun. And then they paid me and I was like ‘are you serious I can do this for a living?’ I became friends with the stunt coordinator and he showed me the blueprint. That was ten years ago and I have been doing it ever since and absolutely love it,” Early says.

Early says there are a few similarities between doing stunts and playing football. “The difference is, that in football you really don’t know what is coming. You go over the middle and you catch that ball and you get hit by some defenders and you just don’t know what to expect,” Early says. “Whereas with stunts — you know exactly what the stunt is going to be — you have an opportunity to work on it and practice it,” Early says.

Early is 56 and says he is thinking ahead to a transition from being a stuntman, while staying in the business. “It’s getting a little bit harder to get thrown through plate glass windows and stuff — but I am still enjoying it, I think I can do it for a few more years. The nice thing is, is that now I am moving into more producing and writing and things like that — so just transitioning to more behind the camera instead of in front of it,” Early says.

Early still keeps up with the Hawkeyes and says he’s watched them as they’ve started the year 6-0. “You should see me in my living room — I am throwing pillows, I’m running up and down the hall — It’s pretty awesome, pretty awesome,” he says.

Early says the basis of the Hawkeyes’ success is the same as it always is in football. “Great teams are built on offensive line, defensive line, and quite frankly the defense,” Early says. “It’s hard for me to say that being a wide receiver — but just the fact that they’ve had great defensive play has let the offense develop and get better. But I think the offense really has done pretty well.”

Early says Iowa has what it takes to complete another undefeated regular season and challenge for the Big Ten title. Today’s players can now make money off their likeness. Early says that money making opportunity doesn’t last and he stresses the importance of having a plan for after football.

“Even if people do make it in professional athletics –that’s short-lived and you still have a lot of life to live when you are done. I was done with football by the time I was 35 and that’s a long career. A lot of people are done way earlier than that and you have a long life to live,” Early says. “So it’s really important to have other things that you can work on and accomplish to be successful in the business world.”

The U-I Homecoming parade is Friday and Iowa plays Purdue in the homecoming game on Saturday.