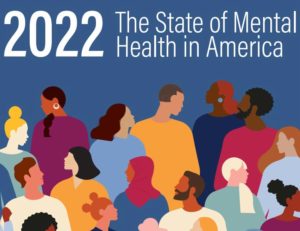 Iowa remains in the middle of the pack in a new report called The State of Mental Health in America, which ranks the states based on 15 mental health access and prevalence measures.

Schroeder Stribling , president and CEO of Mental Health America, says Iowa places 23rd on the latest rankings. “Iowa has been staying generally the same,” Stribling says. “I think you’re in a strong position with that trend and of course, as is true for all states, you can continue to develop additional resources for people, especially as we get prepared for the current mental health crisis.”

The nonprofit organization offers a free, anonymous, online mental health screening program which has seen exceptionally heavy use in the months since the pandemic struck our country. “We have had a more than 600-percent increase in the number of individuals using that screening program,” Stribling says. “Primarily, these are youth, ages 11 to 17, and they are looking to screen themselves chiefly for depression, anxiety, or thoughts of self-harm or suicide.”

The report finds COVID-19 has brought greater morbidity and mortality, as well as disastrous effects on the nation’s mental health. “One of the things that is true for some states and true for Iowa is that there’s a real difference between urban and rural areas,” she says, “and how they can address mental health concerns and what policies and programs they need in place to do so.”

As an example, Stribling points to a recent University of Iowa study that found the rate of farmer suicides is three-and-a-half times higher than the general population. Despite all of the negatives, she says there are reasons to be optimistic about the future. Much like 911, a new three-digit National Suicide Prevention Lifeline is being created.

“There’s a new mental health crisis response system that is rolling out this year,” Stribling says. “All advocates, lawmakers, policymakers should be involved. It’s called 988. It’s been federally approved and it’s now up to the states to enact this legislation. That’s another thing that’s relevant for Iowa which has not yet enacted legislation on 988.”

While Iowa ranked 23rd on the report this year, Massachusetts, New Jersey, and Pennsylvania were the top three states, while Arizona, Idaho, and Nevada ranked last.