You are here: Home / News / Whitver says eliminating Iowa’s income tax should be the goal 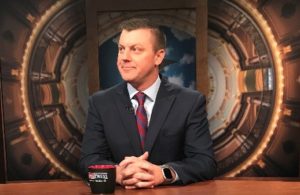 The top Republican in the Iowa Senate says every Iowa taxpayer should get an income tax cut, but Senate Majority Leader Jack Whitver of Ankeny says the ultimate goal should be eliminating the state income tax altogether.

“Right now, there are about eight states that do not have an income tax. There’s another eight states that have said: ‘We want to get on a path to no income tax.’ And I would like Iowa to be included in those states that say: ‘Ultimately the goal is to get to nothing,” Whitver said during a recent appearance on “Iowa Press” on Iowa PBS. “How you do that is difficult. It takes time, but that should be the goal, to get rid of our income tax.”

A century ago — in 1921 — Iowa was the first state in the country to impose a cigarette tax, then in 1934 the Iowa legislature enacted a statewide sales tax and a state tax on income. Democrats say tax cuts should be targeted toward working Iowans rather than an across-the-board reduction that would benefit wealthy Iowans and corporations. Republicans will pursue “broad based tax reform,” according to Whitver.

“Wealthy Iowans work, too,” Whitver said. “We want it to apply to every Iowan and that’s what we’ve done over the last five years is cut taxes for everybody.”

In 2018, Republican lawmakers passed a tax reduction package that Democrats warned was fiscally irresponsible and would lead to underfunded schools and reduced state services. “This is a bobsled to bankruptcy is what they kept saying,” Whitver said. “In fact, the exact opposite is true.”

The state had a more than a $1 billion surplus when the last fiscal year ended on June 30th. Republicans say that should be returned to taxpayers. Whitver said getting rid of the state income tax can’t happen in one or two years, but a flat tax on income — without any deductions or credits — might be the first step.

“It’s a good idea. It’s fair. People understand it,” Whitver said. “…We have a tax code that’s a mess with credits and exemptions all over the place. We’ve had to straighten that out before we can really take the next step.”

Iowa State University economist Peter Orazem said this summer that if the state income tax is eliminated, the state sales tax would have to be raised substantially. He said Iowa’s property tax rates are a bigger deterrent to economic growth than Iowa’s income taxes.