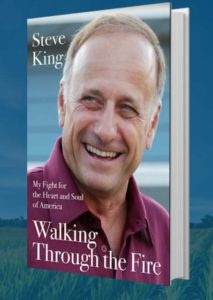 Former Iowa Congressman Steve King has published a book that names and blames some fellow Republicans and interest groups aligned with the GOP for what King calls a “massive conspiracy” to end his political career.

“Maybe some of the people at that upper echelon who might get their tail feathers singed a little bit in this book will reset themselves and go back to being the decent human beings I knew before they did this,” King said during an interview late Tuesday.

King, who is 72, said things “started to melt down” for him politically just before the 2018 election when the Wall Street Journal and others criticized him for meeting with members of a Hungarian political party associated with the neo-Nazi movement. After King’s narrow, 3% margin of victory over Democrat J.D. Scholten, Governor Kim Reynolds told reporters King needed “to decide whether he wants to represent the people and the values of the fourth district or do something else.”

One chapter in King’s book is titled “Redefining McCarthyism” and it lists his complaints about Kevin McCarthy, the top Republican in the U.S. House. In early 2019, McCarthy said the party “will not tolerate” King’s comments about white supremacy and removed King from House Committees. In the book King accuses McCarthy of blocking steps that could have led to King regaining those committee assignments.

“I just couldn’t believe there could be, I’ll say, that low a level of integrity at those high levels in office,” King said today.

Radio Iowa was unable to reach a spokesperson for McCarthy.

King endorsed Ted Cruz before the 2016 Iowa Caucuses and King admitted in the Radio Iowa interview that there was a “political cost” once Trump won, as Trump did not acknowledge King publicly in 2018 or when King faced a GOP Primary opponent in 2020.

“That’s part of the cancellation that came about and the governor was involved in some of that,” King said. “…(Reynolds) took Randy Feenstra by the hand and led him back to shake hands with President Trump.”

A spokesman for Governor Reynolds declined to comment. Feenstra, who finished 10 points ahead of King in a field of five GOP Primary candidates, was elected to Congress last November with 62.2% of the votes cast in the fourth congressional district.

The title of the book is called “Walking Through the Fire” and King said it’s partly written so his eight grandchildren can read his own words rather than “the 41 pages (about him) on Wikipedia.”

“I’m very grateful to my staff and my family and my real friends. None of them left me through all of that — not a staff person, not a family member said: ‘You know dad, you’ve gone too far,’ or anything like that,” King told Radio Iowa. “The real people in my life stuck together.”

The book can be purchased online at SteveKing.com and King said his publisher will release it nationally in a few weeks. The book was published by a company co-founded by Oliver North, the former National Rifle Association president and TV host who was involved in the Reagan Administration’s Iran-Contra Affair.