You are here: Home / News / Democrats call on GOP lawmakers to vote ‘yes’ on redistricting Plan 2 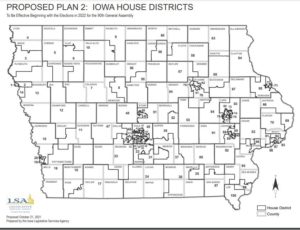 Iowa Democrats are calling on Republicans in the legislature to approve the second plan to establish new boundaries for congressional districts as well as districts for Iowa House and Senate seats.

The redistricting plan was produced by the non-partisan Legislative Services Agency and state law does not allow lawmakers to amend this second plan. “It’s vitally important that we keep our current process free of political interference, to ensure that all Iowans have a voice,” says Iowa Democratic Party chairman Ross Wilburn of Ames, who is also a member of the Iowa House. “Iowans deserve fair redistricting…and, most importantly, without any added amendments.”

If the Republican-led legislature rejects Plan 2 for redistricting in a special session next Thursday, state law would allow amendments to the third plan produced by the Legislative Services Agency. Senate Democratic Leader Zach Wahls of Coralville said the agency addressed the concerns Republicans raised about the first plan and Plan 2 meets legal and constitutional requirements.

“Senate Democrats will vote for it and legislative Republicans should join us in voting for fair, non-partisan maps,” Wahls said. “…Approving this fair, non-partisan redistricting plan is in the best interest of both parties and, more importantly, it will be the best outcome for all Iowans.” 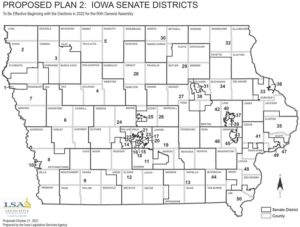 House Democratic Leader Jennifer Konfrst of Windsor Heights is calling on Republican lawmakers to ensure redistricting is the only subject legislators vote on next Thursday. Groups opposed to vaccine mandates are asking Republicans to pass a state law forbidding those kind of requirements and Konfrst said there are rumors a bill on the topic may be introduced next Thursday.

“That’s why we’re trying to make it as clear as possible that we believe Republican leadership should keep their word from the first session and ensure that all we do is focus on redistricting,” Konfrst said. “January’s not too far away. There’s plenty of time to talk about issues the legislature should or should not consider.”

The 2022 Iowa legislative session is scheduled to start on January 10.

Democrats held an online news conference Thursday afternoon. Republican legislative leaders issued written statements yesterday, thanking the Legislative Services Agency for the quick turn around on a second plan and saying they’re reviewing the maps to see if the districts are fair.