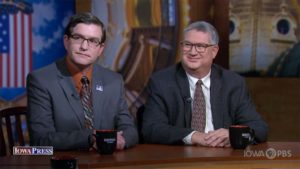 “You’re seeing what’s dubbed as ‘Striketober’ but that has started since before that,” Wishman says.

Wishman says John Deere workers are drawing a line in the sand for themselves and future workers.

“These folks are out here striking on behalf of members they haven’t even met yet, who haven’t even been hired yet,” Wishman says, “because one of the issues if they want to remove the retirement system for anybody hired after November 1.”

Paul Iversen, a labor educator at the University of Iowa Labor Center, says the two-tiered system the union’s striking over doesn’t provide the same level of pay and benefits to every worker.

Iversen says in a tight labor market, striking workers appear to have more leverage. “Ultimately, employers will have to change the way that they approach employees,” Iversen says, “or they’re not going to have anybody to do the work.”

The Iowa Federation of Labor’s president says it’s not just union workers who are challenging the status quo. “In the past two weeks in Sioux City, in non-union facilities, you’ve had walk-outs over pay and shift differential,” Wishman says. “…I believe we’re at the front end of a worker uprising in this country.”

Wishman and Iverson made their comments this week on the “Iowa Press” program on Iowa PBS.

Late Friday, John Deere announced it will continue providing health care benefits to union workers and employees will not lose bonuses they earned before the strike started October 14. The bonuses are paid for exceeding performance goals. The union would have had to start providing health care to striking workers, but the benefits would not have been the same as the plans Deere employees have now. A spokeswoman for the company said Deere and Company is taking these steps to demonstrate its commitment to doing what’s right by John Deere employees.