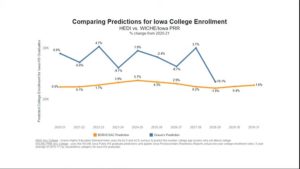 Enrollment numbers for the three state supported universities. (Board of Regents graph.)

The Board of Regents got a detailed look Thursday at the numbers behind what has been a five-year decline in enrollment at the three state universities.

Analyst Jason Pontius, says they’ve looked at a lot of numbers. “The big story here honestly is no college. More and more of our high school graduates are choosing not to go to college after graduation,” Pontius says. He says that does raise a concern looking ahead.

“And one of the areas that is probably most concerning is that this is all pre-COVID numbers. We had seen over a six-year period a five percentage point decline in the percentage of the high school classes that are deciding to go to college,” Pontius says.

There’s been a concern that a drop in births will catch up to states for high school and college enrollment –but he says Iowa shouldn’t see as big an impact as other states. He says the numbers are going to go up and then come back down again, but there won’t be a big difference from where they are at now.

Pontius says another question is whether more Iowa grads are going to college in other states. “Pretty definitive answer there is no,” according to Pontius. “We’ve consistently kept about 87% of our Iowa high school graduates, and signs are that we are actually improving on that a little bit.”

He says there was one exception to the out-of-state loss of students. “You can see at one point there was a big uptick for students going to South Dakota. Most of those students are in the western part of Iowa,” he says. “That happened when South Dakota started offering in-state tuition (to Iowans). And those numbers are coming back down again.”

Pontius says the three schools have also lost some foreign students. He says recent small sophomore and junior classes also contributed to the decline in enrollment. But, he says all three schools saw an increase in first-year students this fall and that is a good sign.