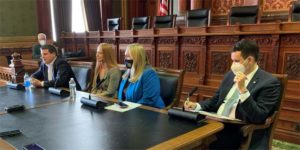 Participants in the forum. (RI photo)

Governor Kim Reynolds says she’s working on legislation that would set parameters for local school officials to follow when parents object to books in the school library.

“If a parent has a concern about what’s in there, there should be a process where they get answers and they should have options,” Reynolds said during a statehouse forum sponsored by the Iowa Capitol Press Association. “…I’m telling you what some of the parents brought forth to me is concerning.”

This fall, two Republicans in the state senate proposed charging teachers and school librarians with a crime if students have access at school to certain books. Reynolds instead suggested that parents be given easy access to a list of books in the school library and the books being used in the classroom as well as a process to follow in their local district if they object to certain books.

“I don’t want to paint this as a big, broad problem,” Reynolds said, “because we’ve got educators out there that are doing their best every single day and I’m proud of what they do — my daughter is a public school teacher — and they’ve been there through some really tough times.”

Republican Senator Amy Sinclair of Allerton, chair of the Senate Education Committee. Sinclair, said there’s a difference between a public library and the library inside a public school and, while she’s “never one to ban books,” Sinclair said parental consent could be required for certain titles in a school library.

“You know, if parents don’t want their 12 year old child checking out a book that might have inappropriate, not age appropriate, potentially obscene material, they should have an opportunity to reject that prior to their student getting their hands on it,” Sinclair said.

Sinclair is drafting a “Parents Bill of Rights” and she said its passage is her “highest priority” in the 2022 legislative session.

Sinclair said those are the kind of tools parents need to be actively engaged in their child’s education.

“Parents should know the results of student assessment data or scores or grades,” Sinclair said. “Parents should have immediate and open understanding of what their kids are learning. how they’re learning it and what is actually being graded and measured.”

Senate Democratic Leader Zach Wahls said he’s “thrilled” the discussion has moved away from putting teachers in jail, as that likely discouraged teachers from taking or staying in jobs in Iowa schools.