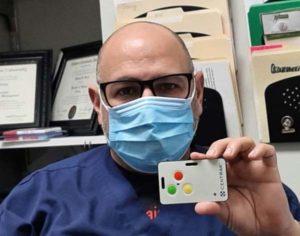 Assaults at hospitals increased at some locations in the state during the pandemic. That includes Sioux City where police reported six assaults of staff at MercyOne and five at UnityPoint St. Lukes.

In the Mercy One Emergency Department, Johnny Garza says they have a two-part training that first emphasizes dealing with situations as they escalate and how to get out of them.

“The second part of the training is what do you do if physical contact is made — how do you ensure safety to self? For instance, what techniques are involved if you are grabbed by the arm, grabbed by the hair if someone is biting you,” Garza says. “So, each one of these, the safety training that we provide does provide resources for staff on how to escape or how to prevent further injury.”

He says there are alarm buttons in the ER for staff to get help if things do escalate.
“By initiating either the emergency or the code, you are definitely going to get team members there to assist,” he says. Garza says the staff also have an alarm system that is linked to their ID badge.

“So it’s on them every single minute that they are working. There’s a button that they are to push. This will not only activate a panic alarm — but it will also tell staff where that distressed staff member is so that staff and security can respond,” Garza explains. Staff also have radios available.

The University of Iowa recently reported that two-thirds of the aggravated assaults on the campus in 2020 happened at the University Hospitals and Clinics. The Journal of the American Medical Association reported this trend of staff assaults began in April — but the story said attacks on health care workers have been rising for years.