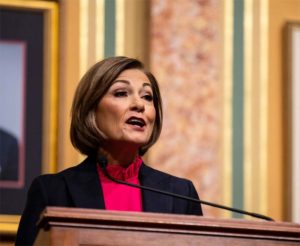 Governor Kim Reynolds is proposing an end to state income taxes on pensions and retirement accounts and lowering the state income tax to a single rate of just 4% within four years.

“Flat and fair,” Reynolds said, to cheers, as she described her tax plan during the annual “Condition of the State” address to legislators Tuesday evening.

When fully implemented in 2026, Reynolds said a four percent flat tax would save an average Iowa family about $1300 a year.

“Yes, we’ll have less to spend once a year at the Capitol,” Reynolds said, “but we’ll see it spent every single day on Main Streets, in grocery stores and at restaurants all across Iowa.”

“This will be a game changer that will incentivize employers to share ownership with their employees,” she said, “and send a message to the rest of the country: ‘Come, move to Iowa. Work here and become an owner in a company and grow your investment tax free.'”

“Flat taxes are notoriously beneficial to wealthy Americans and that would be true in Iowa as well,” Konfrst said. “I think it’s great that Iowans in the middle would get a $1300 reduction in their taxes, but we didn’t hear what’s going to happen to the folks at the top. They’re going to get a much more significant cut.”

Senate Democratic Leader Zach Wahls said some Iowans, like part-time workers, will wind up paying more in taxes under a 4% flat tax.

“When Republicans talk about cutting income taxes for millionaires and billionaires, that often results in a property tax increase on the backside,” Wahls said.

Reynolds said “bold action isn’t always government action” and her tax plan lets Iowans decide where and how to spend more of their own money.

“All of these tax cuts have one thing in common: they reward work,” she said. “Work to be done and a lifetime of work to be proud of and that’s never been more important as the country is facing an unprecedented worker shortage.”

Reynolds is also asking legislators to reduce the number of weeks Iowans may receive unemployment benefits, from the current 26 weeks down to 16 weeks.

“There are so many reasons for the worker shortage, but we need to recognize that in some cases it’s because government has taken away the need or desire to work,” Reynold said. “The safety net has become a hammock.”

Konfrst, the House Democratic Leader, said it will take more affordable child care and housing and a welcoming state to solve the state’s workforce shortage,

Reynolds told lawmakers she will use federal pandemic relief money to provide one-time bonuses to law enforcement, correctional officers and teachers. Reynolds got her biggest burst of cheers, though, when she pledged the legislature would respond to parents raising complaints about books in schools that have what she described as X-rated sexual content.

“We live in a free country with free expression, but there’s a difference between shouting vulgarities from a street corner and assigning them as classroom reading,” Reynolds said. “…Parents matter and we’re making sure that you stay in charge of your child’s education.”

“The bigger problem that we have in our system is that we can’t get enough bus drivers to get kids in Davenport to school, class sizes in Mason City are getting bigger and there are going to be a lot of schools in Iowa in August that aren’t able to open because they don’t have enough teachers,” Wahls said, “and when that happens, thank Governor Reynolds.”

Republican legislative leaders like House Speaker Pat Grassley say the governor has made “reasonable proposals” that will bring “meaningful” change. Senate Majority Leader Jack Whitver of Ankeny said the Senate GOP might even propose a flat tax that’s lower than 4%.

“We want to start the march to zero,” Whitver said. “A big part of that march to zero is getting to a flat rate.”

Ten other states currently have a flat tax. Iowa’s income tax is the 16th highest in the country according to the governor’s staff and a 4% flat tax would move Iowa’s tax rate into the fifth lowest spot.