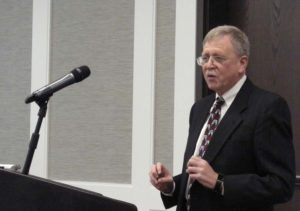 Socioeconomic studies conducted for the Iowa Racing and Gaming Commission show some types of crimes do increase in casino communities — but overall those communities aren’t less safe.

Spectrum Gaming Group managing director, Michael Pollock, says you have to look very closely at the crime studies. “Crime is a universal concern, a universal question in every gaming market. And the reality is –we’ve been studying this for 40 years — casinos do not create street crime, do not do anything along those lines,” Pollock says.

Pollock says certain types of non-violent crimes– such as robberies and thefts — are higher in casino towns. He says that’s because there are more people and money there and opportunities for criminals.

“There’s going to always be some relationship, but it’s really a function of the number of people and the amount of money and the number of visitors. It doesn’t make a community unsafe,” he says. Pollock says other positive factors offset the impact.

“When you add employment, and you add capital investment, quite the opposite is true. The community becomes safer. When you say the crime rate increases, people think that makes that community less safe — and it’s not the case,” according to Pollock.

Pollock says their study shows similar things with other socioeconomic impacts such as divorce. “You may in certain instances and this is nothing particular about Iowa, it could be in any state. You may see a correlation and that does not equate to causation. In our 40 plus years in this industry, there is nothing in the nature of this industry that would cause divorce rates to go up, or child abuse or any of the other issues,” Pollock says.

He says you also have to look at the history of an area prior to the casino being there.
“The communities that seek to have a casino as an economic stimulus and very much want that economic stimulus, often have a lot of problems to begin with that they don’t have the resources to address. So, those problems may have been there, to begin with — that is essential to understanding what these numbers mean,” he says.

Pollock says there is an increase in problem gambling with casinos, but he says there are a lot of factors involved in that issue as well. He says the problem gambling rate remains very low in Iowa and the state ranks fourth for the amount of money put into its gambling treatment program.

You can see the full report on the Iowa Racing and Gaming Commission website.