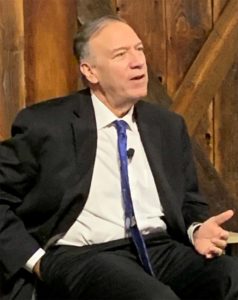 Former Secretary of State Mike Pompeo says Russian President Vladimir Putin has been “testing the west” and whether the U.S. would defend important American interests in Ukraine.

“I love the Ukrainian people,” Pompeo said. “I’m confident they will fight. What they need is support from their friends and allies and we can most certainly do that.”

Pompeo is in Iowa for events in two cities. He spoke with Radio Iowa earlier tonight, three hours before reports that Putin had authorized a military operation in Ukraine.  Pompeo tonight criticized the Biden Administration for letting “a bad man roll around Europe” and he also suggested former President Trump’s recent description of Putin as “savvy” and “genius” was being misinterpreted.

“We should respect Vladimir Putin’s capabilities and his cunningness,” Pompeo told Radio Iowa. “We should recognize he is evil and has malign intent for the west and we should work every day to protect freedom loving people. I wish, I only wish the Biden Administration had done that.”

Pompeo, though, described Putin’s aggression as primarily a European challenge and he said Europe must show it can defend itself.

“President Trump and I made clear to NATO they needed to do more. They needed to actually spent money to defend their own countries in ways that they weren’t,” Pompeo told Radio Iowa. “If there was ever a signal moment for them to all step up and say: ‘I’m going to actually make my 2% promise for spending…2% of GDP, I’m actually going to build out my army and my Navy, I’m going to make my helicopters fly’ — this is the moment for NATO to come together.”

Pompeo spoke at an hour-long event hosted by a brand new group called the Bastion Institute. Iowa Senator Joni Ernst spoke, too, and warned that instability in Europe has ripple effects in the United States.

“Our NATO friends are asking us to step up. Does that mean sending troops in? No, it doesn’t,” Ernst said. “But what it does mean is providing more lethal aid to the Ukrainian people, using some of those sanctions against Vladimir Putin and specifically against him and all of the primary banks within Russia.”

Ernst has been calling for the Biden Administration to impose pre-emptive sanctions against Russia and she said the financial restraints Biden has announced thus far don’t go far enough.

Ernst and Pompeo will speak Thursday night at a GOP fundraiser in Fort Dodge.

Senator Chuck Grassley said earlier today that the U.S. needs to draw “a line in the sand” with sanctions against Russia. Grassley faulted the Biden Administration for not revealing earlier what steps the U.S. would take.

“If you wanted to go back to what should have been done already, I’d say these sanctions maybe shouldn’t have been put on before they invaded,” Grassley said, “but they ought to have known what they were, so it would have retarded their efforts.”

Grassley made his comments in Atlantic, long before Russia began attacking Ukraine.

(This story was updated at 11:30 p.m. with additional information; reporting in Atlantic by Ric Hanson of KJAN)