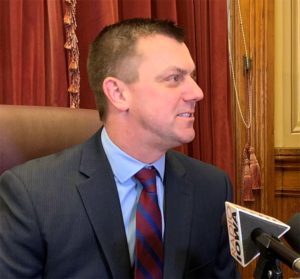 Tax negotiations among key Republicans at the Iowa Capitol appear to have yielded a final plan. Senate Majority Leader Jack Whitver spoke with Radio Iowa after meeting with his fellow Republicans in the Senate early this morning.

“This is going to be a historic day here in the Iowa Senate and in Iowa in general,” Whitver told Radio Iowa. “We’re about to pass the largest tax cut in state history. Happy to get agreement with the governor and the House to get this done and deliver on a promise that we made for the past year, that when we have excess revenues, we’re going to continue to cut taxes.”

Whitver said the final version that likely will be making its way through the legislature today hews closely to the plan Republican Governor Kim Reynolds unveiled on January 11. It shrinks Iowa’s personal income tax rate to a single rate within four years.

“We’re going to be at 3.9%, which of the states that have an income tax will be the fourth lowest in the entire nation,” Whitver told Radio Iowa. “That’s a huge improvement from the eighth worst, which is where we started.”

The plan will erase the income tax on retirement income and it will reduce the corporate income tax. Whitver said the final deal also reduces a handful of refundable tax credits, including the research activities tax credit that yields refund checks for some corporations.

“It’s kind of a compromise between what the governor laid out day one and what the House and the Senate have been working on,” Whitver told Radio Iowa, “so we’re going to continue to, over time, ratchet down the corporate rate as the governor laid out, but as the Senate and the House we wanted to continue to look at some of the tax credits and how big the checks are that we’re writing out to some of the biggest entitites in the state of Iowa, so we’re going to start to ratchet down the refundability of those over the next five years and try to make the (corporate income tax) rate flatter and fairer for everybody, instead of just special interest carve outs.”

The plan does not eliminate tax credits, Whitver said, but in some cases will reduce a corporation’s ability to use the credit to eliminate it’s entire tax liability and wind up getting a refund check from the state.

“Starting that conversation of what we need our tax code to look like long term,” Whitver said.

Last June, the governor signed a bill that cut personal income taxes, eliminated the inheritance tax and got rid of a property tax levy. Senate Republicans estimated it would reduce state tax collections by $1 billion dollars over eight years. Early estimates indicate the plan to be voted upon today be far larger.

“This has been a Senate Republican priority for the six years we’ve been in the majority, to continue to reform taxes and make us competitive,” Whitver said during the Radio Iowa interview. “When we pass this bill today and hopefully the House does the same, Iowa will be one of the most competitive states in the country now for taxes.”

On Tuesday night, Governor Kim Reynolds is scheduled to deliver the Republican response to President Biden’s State of the Union speech. Action today on the tax plan means she’d be able to tout it in her remarks.

“Iowa has a great story over the last couple of years and we’re really excited that the governor gets to go on a national stage and explain that story and this is just part of it,” Whitver said, “but it certainly is a big part of it.”

(This is a developing story; check back for updates)