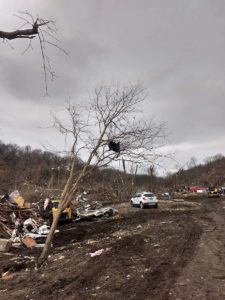 Damaged trees and debris from tornado near Winterset. (RI photo)

Meteorologist Chad Hahn, at the National Weather Service, says much of the area that was hit by the twisters got four or five inches of snow late Sunday and this morning, which is slowing recovery efforts.

“Fortunately, we had three teams out yesterday and we got a good cross-section of the areas that were impacted,” Hahn says. “Unlike the December 15th event where we had multiple tornadoes along the derecho line and the squall line that moved through the state, these were a little bit different in that they were consistent on the ground for a long time.”

During that December derecho, Iowa was hit with 61 tornadoes, a record for December and a record for one day. Tornadoes can strike during any month, but Hahn says this developing pattern is highly unusual.

“Severe weather isn’t rare in the month of March. We have had severe weather events during March in the past and early March as we saw a couple of years ago in the southern part of the state,” Hahn says. “What made this one truly unique or rare was the magnitude, number one, and two, just the persistence that these tornadoes were able show and exhibit.”

The Enhanced Fujita scale classifies tornadoes from weakest (EF0) to most powerful (EF5). Of Saturday’s four tornadoes, two were rated as EF2s and two were rated as EF3s, while Hahn says it’s possible the twister that hit Winterset may be rated even more powerful. That EF-3 was on the ground nearly 14 miles, and two of the others lasted even longer.

The EF3 that hit Red Haw State Park in Chariton, killing a camper, was on the ground more than 16 miles, with peak winds of 138 miles an hour. Another twister landed near Leon, grazed Garden Grove and Humeston before pulling up near Derby in Lucas County. It was on the ground for more than 19 miles. Hahn says it was an intensely lethal storm system and that duration of tornadoes is atypical.

“It is a very rare scenario to have a storm of this magnitude in early March,” Hahn says. “Severe weather is common as we see the seasonal change, as we start to see the cold air masses clashing with the warm air masses coming up from the south, but to have something of this scale is what made this one very rare.”

A fourth tornado developed near Allerton and passed near Corydon. It rated as an EF2 with peak winds of 118 miles an hour and was on the ground for  7.5 miles. All four tornadoes struck during the 5 o’clock hour late Saturday afternoon, with the Leon/Garden Grove/Humeston/Derby tornado lasting the longest, at 27 minutes. The Winterset tornado is still being studied and Madison County is now a state disaster area.