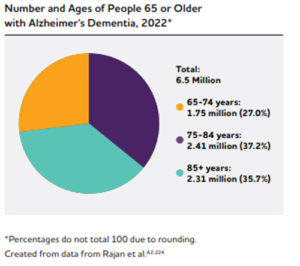 A new report from the Alzheimer’s Association paints a dim picture for Iowa and its aging population. Geriatricians are rare here.

Those are primary care doctors who have special training to treat older adults. Lauren Livingston, spokeswoman for the association’s Iowa chapter, say Iowa has a little over two dozen geriatricians and the report says we’ll need well over a hundred by 2050 to meet demand.

“We need an increase of almost 450% for geriatricians across the state,” Livingston says. “Surprisingly, there are only 26 practicing geriatricians in Iowa, which seems very small — and it is — compared to the population and the increasing aging population.” There are four gerontology programs in Iowa — at Iowa, Iowa State, UNI and at Des Moines Area Community College.

As the prevalence of Alzheimer’s rises in Iowa, so does the need for dementia care workers who can diagnose, treat and care for those living with the disease. “One thing would be training primary care physicians and other health specialists to recognize diseases like dementia that come across in older age,” Livingston says, “so, training more doctors, even if they’re not geriatricians, to recognize those signs and be able to refer them on to a geriatrician or another specialist.”

About six-million Americans are living with Alzheimer’s, including some 66,000 Iowans. The report calls Iowa a “dementia neurology desert,” where the demand for direct care workers is projected to grow by more than 40% in the coming years while their availability will likely fall.

“There are 20 U.S. states that have been deemed ‘dementia neurology deserts’ which means they have less than ten neurologists per 10,000 people with dementia and that doesn’t even include people living with other diseases that might see a neurologist,” Livingston says, “so that’s a crisis as well.”

In 2018, Iowa had more than 19,000 home health and personal care aides. The number of these workers will have to increase 34% just by 2028 to meet the growing demand. See the full report, 2022 Alzheimer’s Disease Facts and Figures, at the website: alz.org/facts