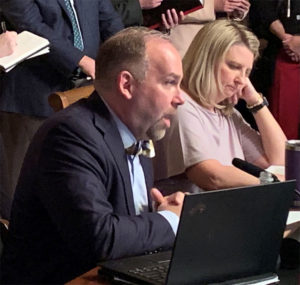 Another proposal for revamping Iowa’s 44-year-old Bottle Bill has won bipartisan approval in a House committee and could be debated by the full House early next week.

Just like a version pending in the Iowa Senate, it would no longer require grocers, convenience stores and other retailers that sell beer and pop to accept the empty bottles and cans and pay the nickel deposit fee in 2023. Brad Epperly, a lobbyist for the Iowa Grocery Industry Association, said if that change takes effect, it’s a significant step.

“Progress around this place is sometimes slow,” Epperly said. “Something like this is more of a quest.”

But grocers object to another section of the House proposal that would require them to pay another half-a-cent per container.

“For us, payment to opt out of a government mandate is something principally that’s very challenging,” Epperly said, “let alone the amount that we’re talking about here.”

He estimates the bill would require grocers and retailers to pay an additional $50 million over five years. R.G. Schwarm, a lobbyist for the Iowa Recycling Association, said it’s a positive step to double the handling fee for redemption centers which are struggling to stay in business. However, Schwarm said the plan, as written, appears to let all retailers opt out of accepting cans and there aren’t enough redemption centers to deal with the volume of empties containers.

“There are 44 counties that do not have a redemption center…It’s largely in rural Iowa and that’s where our concerns lie,” Schwarm said. “When we remove a significant amount of infrastructure for redemption, that’s where we’re going to make it more difficult for Iowans to redeem.”

The House plan also proposes a new tax credit for beer makers that’s connected to the number of empty beer cans that are redeemed for the deposits. Representative Brian Lohse, a Republican from Bondurant, is the leader of a group of House members who’ve been working on a compromise. After a House subcommittee meeting early this morning, Lohse told reporters that lawmakers hear about the Bottle Bill from Iowans daily.

“It’s something that we know we have to do. I mean this isn’t just a, ‘O.K, it’s not working. We’ll see what we can do.’ This is, from our leadership, ‘Get something done,'” Lohse said. “And we are tired of talking about it. We know we need to have action. Now’s the time to do it.”

Lohse, who owns a grocery store, said the proposal requires all the private businesses involved to participate in changes in the bottle and can redemption system. A House subcommittee reviewed the plan at 8 a.m. today and the House Ways and Means tax-writing committee approved it two hours later. It passed the committee with only three no votes.