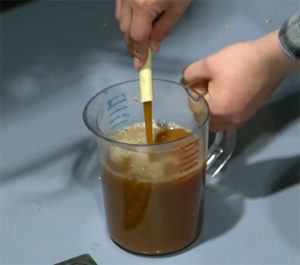 There are some students at Iowa State University who can actually say beer is helping them get their degree.

ISU professor Robert Brown has been brewing beer on his own for years and was approached by the Center for Crops Utilization Research as they wanted to expand the types of fermentations they are doing. He agreed as long as he could develop a class on the subject.

“So I scrambled working with the folks that approve courses at Iowa State and got it approved last November, and here we are teaching it,” Brown says. He got help from an ISU Alum who donated brewing equipment his company makes to get them going, and the crop center found space for the brewing lab.

“The students get a lecture once a week, and then they spend the whole afternoon in the laboratory,” Brown says. “And they are introduced to different kinds of equipment appropriate to whether it’s home brewing they are interested — or to look at commercial brewing of beer.”

He admits some people question a beer brewing course on campus — but he says there’s a lot to it.
“The course is called the science and practice of brewing. And I put science first because the students are asked to reach back to what they learned their freshman and sophomore years in chemistry and biology and microbiology, and things that they learned — especially those who are engineers — to heat transfer, thermal dynamics, and apply that to the brewing of the beers,” according to Brown.

He says you can’t just throw the ingredients together and expect to get a good beer. It takes some time.
“Working out how much grain and how much water to work into it,” he says. “So it really is for many of them I think a culmination of their studies at the university — whether it was food science or mechanical engineering,” Brown says.

The industry has changed so much in the last several years and there’s more happening now as well.
“There’s talk about hard seltzers for example and non-alcoholic beers, so there’s a revolution that’s technology driven,” he says. Brown says the talk also centers on whether to brew large batches of beer you can market nationwide, or focus on smaller batches to be sold locally.

Students in the class do have to be 21. Brown says he takes a team approach to the brewing process.
There are five students assigned to each of the four identical brew stations, and sometimes they are trying to determine if one brew was better than the other with the same recipe. He started the brewing class in January and says the batches of beer have been improving.