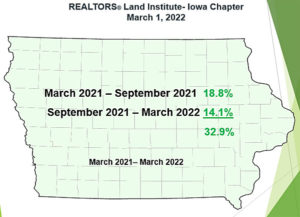 A survey released by the Realtors Land Institute shows land values haven’t dropped off at all.

Scott Seifert presented the results. “From September 1st, 2021 to March 1st, 2022 as a state average on farmland — it went up 14.1%. That is all nine regions and taking in your low, medium and high-quality cropland,” Seifert says.

Their survey is done every six months, and he says when you look at a full year their survey is close to what other yearly surveys have found for cropland prices. He says land prices probably won’t change a lot in the short term as commodity prices remain strong. But other costs could start to impact them.

“That’s going to hold out for a while, but I think as we get through the year and people made more money on the farm for 2021’s crops than they will for 2022 probably — because inputs are definitely going to catch up, and we’ve already seen that some,” he says.

Seifert says those economic factors might slow things a bit. “I don’t think we are going to see the rise like we’ve seen the last 12 to 18 months,” Seifert says. He says that is already evident in the survey when they ask landowners about the expected return.  A majority of those in the survey last March said they wanted to see a three percent return, and this year they are hoping for a two percent return. But he says they understand they aren’t going to get as much money, but see the land as a hard asset.

Seifert says inflation is another factor that is starting to show up more when they asked about impacts on land values. “In 2021 people said that inflation risk was the least important of the list of them there. And then when you came to 2022, that one wasn’t the highest, but it was not the least by any means — it was more the middle of the pack,” Seifert says. “I think people are just understanding the general economics of what’s going on in the U.S. today.”

Current interest rate levels and low supply of land being offered to the market were other factors that respondents said impacted land value.