You are here: Home / News / Outbreaks of bird flu now confirmed at a dozen sites in Iowa 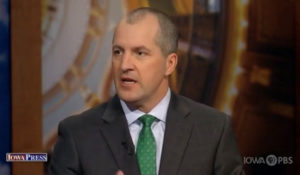 “In the state of Iowa, we’ve got 12 confirmed cases,” Naig said today during taping of “Iowa Press” which airs tonight on Iowa PBS. “Two of those are backyard (flocks). Ten are commercial and we expect and should expect that we see additional sites go positive.”

The newly confirmed cases of highly pathogenic avian influenza are at  a commercial site in Cherokee County with 88,000 turkeys and an egg-laying facility in Osceola County with 5.3 million hens. According to Naig, nearly 13 million poultry animals have been killed in Iowa so far to try to prevent the spread of bird flu.

Naig said in the bird flu outbreak of 2015, the virus spread from facility to facility, but it appears bio-security measures at large operations are working. Officials believe this year’s round of bird flu is being spread by the spring migration of wild birds.

“Wild birds are carrying the virus, they’re interacting with the domestic population and we end up with positives,” Naig said, “whereas in 2015 we had a lot more situations where it was spreading from site to site or from farm to farm, so that’s a pretty distinct difference between the two.”

The bird flu outbreak in 2015 started in mid-April, but the first case of bird flu this year in Iowa was confirmed on March 2. Naig said there’s still a steady supply of eggs, chicken and turkey in grocery stores nationwide, but it appears to be shrinking a bit.

“We’ve got 23 states in the country currently that are dealing with confirmed cases and so this isn’t just an Iowa issue. It’s a U.S. issue,” Naig said. “…The fact is we’re seeing less supply because of the virus and that will result in, we believe, in some prices going up, especially at this time of year, coming up to Easter, when there’s a lot of folks looking for eggs.”