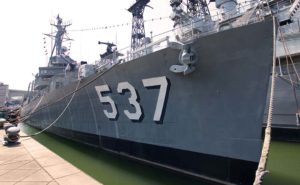 Efforts are underway to try to save the retired Navy vessel named for the five Waterloo brothers who died together in World War II when a Japanese torpedo struck the USS Juneau.

“The Sullivans” — a Navy destroyer — is a floating museum in the harbor at Buffalo, New York. Paul Marzello, president and CEO of the Buffalo and Erie County Naval and Military Park,  discovered “The Sullivans” was sinking last Wednesday due to a breach in the hull.

“Anyone on our board of directors, any staff member, any volunteer, any veteran who’s connected to the ship knows what adversity is all about. They’ve been here in times of war. This is something that’s a blip on the screen to the them,” he said. “We will right this ship. It will not go down.”

Marzello and Buffalo city officials spoke at a news conference this weekend. The vessel is listing to its side. Multiple news organizations quote the U.S. Coast Guard estimate that there’s a million gallons of water inside the ship. Marzello said it’s unclear what caused the breach.

“We are taking it extremely seriously to make sure we are taking in all the measures to correct her as soon as possible,” he said. “What we will need is a bunch of hands to clean up once we do right size her, so that will be our next plan of attack once we figure out what the problem is.”

On Friday, efforts to pump water out were halted as diesel was discovered in Buffalo’s harbor. This weekend divers and equipment began maneuvering inside the vessel to remove contaminants like fuel and oils from inside, to prevent the materials from reaching Lake Erie. The Buffalo News reports a Navy architect and experts from a salvage company will arrive at the site today to assess the situation. Buffalo’s mayor says efforts to save the USS “The Sullivans” will take time.

The five Sullivan brothers died on November 13, 1942 and the Navy destroyer named in their honor was in service in World War II and the Korean War. It was decommissioned in 1965 and has been in Buffalo since 1977.