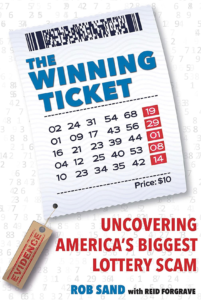 State Auditor Rob Sand is the co-author of a new book about the former multi-state lottery employee convicted of rigging jackpots.

“I mean, it is just a true crime caper,” Sand said during taping of Iowa PBS’s “Iowa Press” program.

Sand was the lead prosecutor in the case against Eddie Tipton. Tipton was the security chief for the Urbandale-based Multi-State Lottery Association. He was convicted of rigging computers to win lottery jackpots in Iowa, Wisconsin, Kansas, Oklahoma and Colorado. Sand said it’s “a crazy story” with some unusual real-life characters.

“These good old boys from Texas (who were) Big Foot hunters — like people who literally go into the woods to look for Big Foot, this shady Canadian lawyer with a trust in Belize,” Sand said, “I mean, there was a point when I was prosecuting that case, I don’t remember what specifically it was, but I started down what was happening for prosterity, you know, thinking someday I’d tell my grandkids. I think it’s just a wild story that I think it needs to be told in full.”

In the book, Sand begins by comparing his childhood in Decorah with Tipton’s small town roots in Texas. Sand was lead prosecutor of public corruption cases in the Iowa Attorney General’s office for seven years and handled the “Hot Lotto” case involving Tipton in 2017. The title of the book is “The Winning Ticket: Uncovering America’s Biggest Lottery Scam.”

“It is not about my political views,” Sand said. “The last half of the last chapter is sort of like the aftermath and I do talk about leaving the office and running for state auditor, but it’s like 5% of the book.”

In January, Tipton was declared eligible for parole after serving nearly five years on his 25-year sentence. However, the parole board reversed its decision this month after Tipton got into some sort of trouble in prison before he was released.