You are here: Home / News / Change in weather should bring a sunny weekend 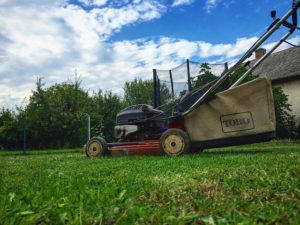 Many people might finally find a day dry enough to mow this weekend. (RI photo)

By most accounts, it’s been a miserable spring in Iowa, with chilly temperatures, plentiful rain and even a few late-season snowstorms, but forecasters say a big change is coming in a few days.

After another cool, drizzly day today, National Weather Service meteorologist Brad Small says we’ll be skipping from wearing coats and gloves directly to shorts and t-shirts. “We’ll gradually warm through the weekend and really flip the switch into summer,” Small says. “As we start next week, we’ll see highs widespread across Iowa in the 80s and we’ll see dew points up into the 60s, at least, with people probably turning on their air conditioners because it will be definitely warm and humid.”

By Tuesday and Wednesday, high temps across Iowa’s southern half may be climbing into the mid and upper 80s to near 90. Small says it’s a big change in a short time. “The extended outlooks are for more above normal temperatures,” Small says. “Normal highs right now are, depending on what part of the state you’re in, they’re right around 70 degrees, so highs in the 80s are definitely above normal.”

Small warns the arrival of this warming trend may include a higher risk of hazardous weather. “When we turn on the heat and humidity, that does introduce some storm chances,” Small says. “We could have some stronger thunderstorms on Sunday or Monday. Right now, there’s an outlook for a slight risk of severe weather on Monday to keep an eye on as we start the next work week.”

We may experience that Iowa weather phenomenon next week of running both the heater and the air conditioner on the same day.